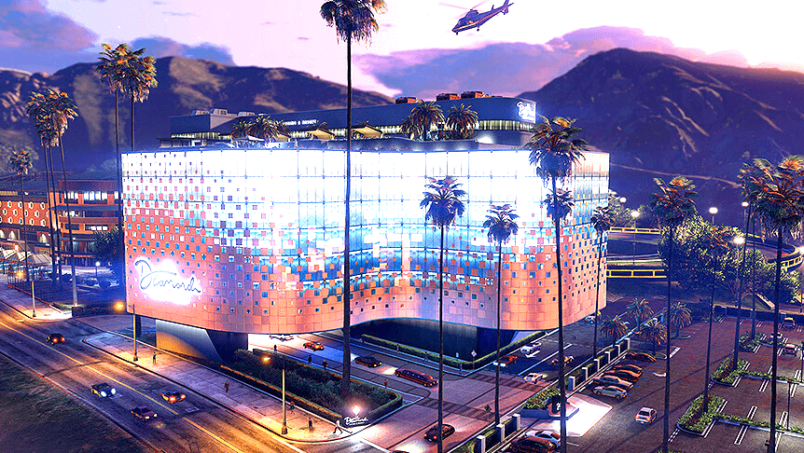 GTA Online – Your account does not have permission to complete this purchase.

This is the message that a bunch of players are seeing when they try buying chips from the cashier at the newly established GTA Online Diamond Casino Spa & Resort in bloody Los Santos.

The very anticipated Casino has just opened today – but gambling is not for everyone. Killing, stealing, trafficking is all well and good in GTA Online but DON’T YOU DARE GAMBLE!

Apparently, people from at least 50 countries, including Portugal, Hungary, Israel and Argentina have been prevented from trading in any chips.

These left-out players aren’t able to access the free daily bonuses at the cashier, or the wheel spin at all. It may also affect bonuses from the Penthouse, missions, world collectibles, and unique clothing and items.

Apparently, there’s a region lock to access the Casino’s features. This includes buying chips and playing with them – effectively limiting all gambling activity for some players.

We’re talking funny money here. In-game cash translates to the same amount of in-game casino chips which can only be refunded to in-game cash.

If there’s one thing Rockstar is used to deal with …is lawsuits.

Apparently, the reason for this region lock is that Rockstar does not want to register as a gambling entity (such as with other online gambling websites). Even if you now have to accept a new EULA, this effectively means that they’re not able to deliver this type of content to a large number of countries.

As far as I understand the law (and other games that do this), the real problem here is the fact that players are able to buy in-game currency with real money and then spend it all gambling (instead of buying new in-game cars).
Well, if that’s the problem, then the already present chip currency could be used to *legally* buy stuff without having to convert it to the real-cash-connected GTA bucks – that wouldn’t be gambling and that would solve the legal conundrum. Think about it Rockstar!

Make sure you follow me on Twitch if you wish to stay up to date about when these things change or a legal alternative has been found!

Here in the EU, only a few players in Germany seem to be able to access the Casino features. This has sparked a rush to VPN services. Players are trying to connect via VPN to get a German or American IP address in order to play at the Diamond Casino. Note: Some people argue that this practice may get your account banned for trying to bypass common online identity checks.

Rockstar support is completely inefficient at informing players why they’re unable to use the Casino. There’s not a single official reply to queries regarding this situation and the players were left to figure it out for themselves.

I’m hoping that they eventually revise their region-lock limitations or that, at the very least, they inform players that they won’t be able to access this content beforehand. Some people are complaining that they bought Twitch Prime to access the “free” content and Penthouse at the now pointless Casino.

Players will eventually find a way around this issue. They’ve done that before with private servers, hacks and the RP server boom in the past couple of years.

They will find a way to make it work – legally, or otherwise.

In any case, it feels lame that the largest GTA Online update in years is locked to so many players around the world.

And there I was. Looking at the shiny new slot machine.
Press E to interact.
ALERT: Your account does not have permission to complete this purchase. For further help, go to: www.rockstargames.com/support

This update should never have been developed in the first place. Their energy should have been spent on new content that everyone would be able to enjoy. Besides the Casino and the Penthouse, the remaining content is just a couple of missions, a few new unremarkable vehicles, and a pair of easily-outdated cosmetics.

Heists is where GTA Online truly shines – co-op missions with cinematics and a story to play with your friends. Yet, no new heists have been released in a VERY long time. Instead, we’ve been stuck with mostly cosmetic updates that don’t effectively expand the story or the replayability of the game.

The truth is that the game is still fun.

Rockstar-outlawed private servers and RP have given it a boost recently. But the updates have mostly been delivering content that is both very expensive and insubstantial.

I live in Portugal. I’ve got a casino across the street from my home and I’m not able to play on GTA Online with funny money. *shrug*

If, like me, you’re not able to play at the Casino, check out my post on How I became an Undead Pirate in Sea of Thieves. A fun read. I promise. And you won’t lose any chips.

Alternatively, you may also want to check out my Twitch channel and join me playing this and other games!

A Guide to Moonshining in Red Dead Redemption 2