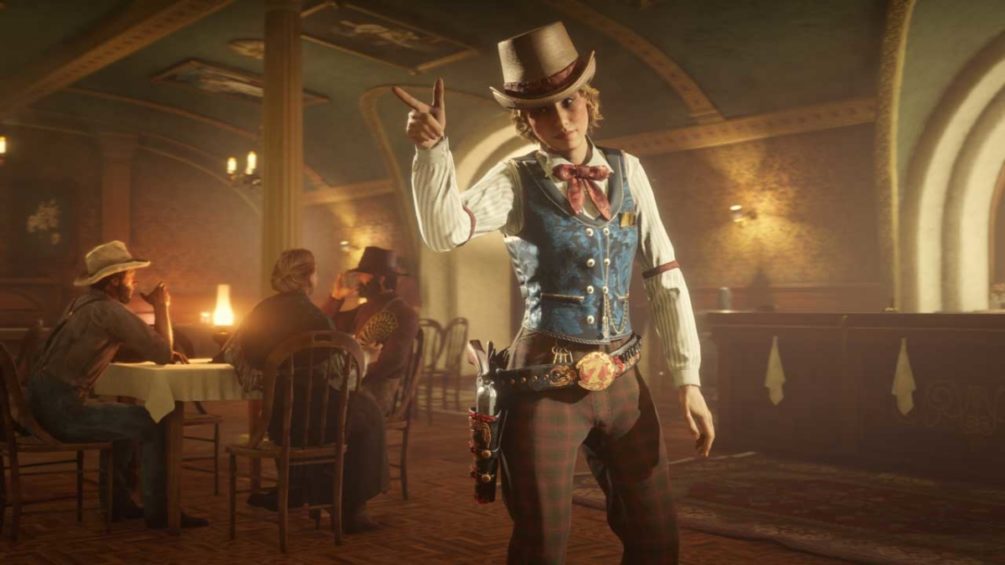 It’s official! You will be Moonshining in Red Dead Redemption 2 Online very soon. Starting on the 13th of December with the new Frontier Pursuit update.

Coming up with the new update, you will be able to own your very own moonshine production facility. You will require a place to do it. Soon after, patrons will start pouring in asking for your very spicy miracle tonics served in a glass.

Eventually, you will be able to upgrade your moonshine “facility” into a very dandy and customizable speakeasy. Afterward, you’ll surely want to add some entertainment – like a local band and a dance floor.

Moonshining in Red Dead Redemption 2 wouldn’t be complete without new gear to make you look like a proper booze king. You will also meet a new character, Maggie who will provide some missions to help you set up shop.

Strangely enough, this will require the player to be Trader rank 5. This might be kind of cumbersome to obtain. Alternatively, you are able to acquire it by completing a sale. Selling is ridiculously easy once you’ve obtained the Butcher’s table. I will eventually post a guide on how to progress your trade rank quickly! Subscribe to my blog via the sidebar on the left to be the first to know!

Now that I’ve given you the latest news, let’s delve deeper into what this effectively means but also how economy systems can add immersiveness to a game, or break it entirely – and why I feel like Rockstar’s fears are a missed opportunity (if at least they allowed us to mod it…).

The gaming dreams of a trader

Trading and owning a store is one of the coolest things I love seeing in a videogame. Unfortunately, this ability doesn’t come along often.
Most games do not support this feature. The ones that do are usually limited in their nature to have it run at a very basic level.

In particular, I love the concept of buying and selling stuff online, to other players and NPCs.

I’m pretty sure I am not alone.

Star Citizen‘s most profitable month in 2019 just passed. It featured a concept sale of a ship (the Kraken Privateer – more like a mobile station) that allows other ships and players to dock and shop inside it. It also marks the detailing of the game’s economy system. This system is definitely of the juiciest and most complex ones I’ve seen in ages. I’ll detail this subject later on in another post.

The problem with most PTPE (player-to-player-economy) game mechanics will always be balancing supply and demand.

There’s only a limited variety of stocks – which everyone is getting all the time from actively farming the game. There’s also a need to have a surplus stock of every item to avoid absurd prices or unavailability of stock. This means that supply needs to exceed demand, which in turn lowers prices over time to a nil-value.

Most games that feature an economic system, have centralized market prices or, instead, player-driven shops. The first reduces your liberty to set the prices for your items but makes it easier (and boring) to buy/sell goods. The second one creates an anarchic price system where each player charges whatever he wants to charge for exotic seashells.

–How much are exotic seashells worth right now? Oh well. I’ll just spend all of my money on this one right here sir, thank you.

I remember playing Pirates of the Burning Sea – almost 10 years ago now – and spending most of my gameplay time at the game’s player auction house. Until I realized… it was rigged!
Well, supposedly it wasn’t, at the start, but having a fully realized player-driven economy is no easy feat.
Commodity prices were skyrocketing and plummeting at such a quick rate that it became impossible to figure out the value of your items. Large trade guilds were able to sell silly amounts of supplies in an instant – thus selling their wares at a very steep price and forcing the price to plummet for everyone else in one server tick – just before they were affected by price updates. This made the auction house obsolete and the game’s economy was ruined.

As mentioned before, Star Citizen attempts to fix this imbalance caused by the players by introducing a majority of NPC-generated trades. However, these NPCs aren’t just averages and hidden calculations. They are actually real NPCs present within instances of the game world, hauling cargo, consuming and producing goods. Moreover, the developers devised a system in which the whole universe breathes economics. NPCs will become unemployed and wander aimlessly on the streets or, instead, the city booms with trade and becomes fancier and more crowded.
The minerals for every missile that players use need to extracted, transformed and sold as missiles. This will be a very interesting economics system to study.

One other big concern for online games with an economic system is cheating – and Rockstar haaaaaates cheating. They avoid the problems of failing economies by tackling this in a very smart, albeit slightly frustrating way.

In reality, they only give you the illusion of an economy system.
All the money you own only exists in the bubble that is you.

In Grand Theft Auto V and Red Dead Redemption 2, you may be incredibly rich and feel like a boss (no, I mean, literally) by owning several companies and employing NPCs that generate revenue on their own – but you will never ever exchange money with another player. One example is buying drinks at your friend’s bar in Grand Theft Auto V which earns him 0$, yet your wallet shrinks a little.

In Red Dead Redemption 2 Your hunting sales aren’t affected by the price of fur in a particular area and all the money you make can only be used to buy cosmetics or other means of making money. You can’t buy a horse for your girlfriend. You can’t even gift her a hat or buy her a drink.

No sugar daddies allowed in RDR2.

One other issue with Grand Theft Auto V – that I predict will be coming to Red Dead Redemption 2 soon enough – is the time and money cost of maintaining these establishments. Grand Theft Auto businesses follow the same logic as the Trader role in RDR2. They only generate revenue when you constantly supply them with tools or stock. The butcher table in RDR2 does give you revenue semi-passively, but it consumes time. A lot of it.

What happens with GTA V is that, when you own many different businesses, you will have to pay regular fees to keep them running. To a point where it will eventually become too expensive to keep them running without supplies. This is only an issue if you’re running around trolling other players or role-playing with your friends or if you just want to have fun without having to worry about sustaining your businesses.

With the incoming moonshiner trader role update, which adds a speakeasy with a band, I’m prrrreety sure these recurring fees will be applied.

These fees act as an economy-balancing mechanism or money-sink. Even if the economic system is just an illusion and individually-set, they keep adding new content to the game and they charge prices according to the global value of money. You will notice that the average price for new cars in GTA has been increasing proportionally to the global amount of money available to purchase them.

In Red Dead Redemption 2 you will likely see this price climb more significantly in most items.

To slightly counter the effects of having too much money in-game, they charge the wealthiest players, who actually own several money-making establishments, with these unavoidable regular fees.

Riding into the sunset…

Don’t get me wrong. Their system works really well. It makes players focus on the fun aspects of the game instead of turning this into a spreadsheet simulator like EVE Online. However, there’s a layer of economic strategy that is missing as well.

As I said before, I feel like It’s a shame for what it isn’t – an immersive, real player-driven economy, where your money is made and lost by the effects of other players around you and where your actions affect others. However, it is really good for what it is – a simple game that entices players to keep playing it for arcadey fun.

I’ll be honest, I was a bit disappointed when I realized that I had gotten the wrong impression before buying the game. I thought that being able to open up shops was already a feature present in the game. It wasn’t. My bad.

Moonshining in Red Dead Redemption 2 makes things more interesting and I’m really looking forward to it. I can’t wait for December 13th and all the missions and assets that the new update brings. These updates are free content that we all get to enjoy piece by piece.

Do you think the economy could be improved in RDR 2? Variety of content to spend your money on seems to be a common request. What are your thoughts on this?

Meanwhile, check out my recent posts on fixing CPU, Lag and widescreen fixes for Red Dead Redemption 2, or my latest one on whether to avoid or embrace Star Citizen!

A Guide to Moonshining in Red Dead Redemption 2

How Steam broke my Valve.