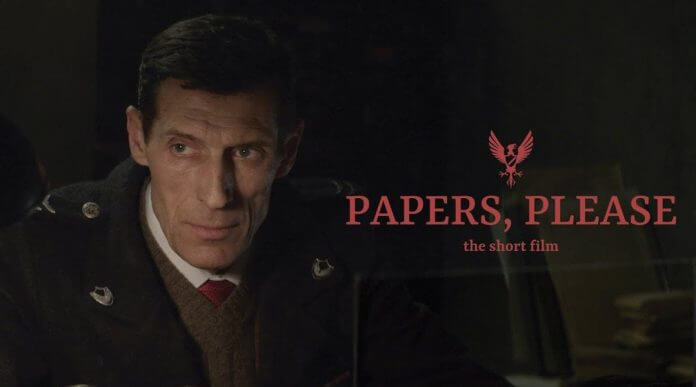 Free to read: there are no movie spoils ahead

Have you read my previous article on How Steam broke my Valve? That’s the prelude to this post!
Go check it out!

As I mentioned in my previous post, Steam has let me down in the past few years, as I used to scroll its shop homepage on a regular basis… Steam then started showing very targeted results and my Steam shop started looking less and less interesting to me. It was showing the same results over and over again!
Somehow this led me to Papers, Please: the short film.

I was bored yesterday.

So I decided to go see what’s new on Steam. But since my Steam shop homepage is kind lame nowadays I went on to figure out what were the best-rated games of all time on Steam.

I was surprised! The top result didn’t belong to a game… It was a movie!
-A short film to be precise.
But not just any film… Papers, the short film!

I have to admit that my jaw dropped a bit and my finger trembled with excitement when I hovered my mouse over it. Was this possible? What kind of black magic is this?!

Papers, Please is one of my greatest heroes when it comes to games.
As I understand it was mostly built by one guy (Lucas Pope) with the help of a small team of Arstotzkan loyal subjects.

The game is set in 1982 at the national border of a very closed soviet-like regime. You were one of the lucky picks of the October labour lottery as your name was pulled for immediate placement as a border admissions control officer. What an honour!

Your job is  to feed your family.

To me, games are about making choices.

…Making the right decisions that bring you the most benefit in order to “win” the game (even though winning something isn’t always required for a player to be entertained or to feel connected to a story).

However, the best games are the ones that make you think twice.

Papers, Please excels at this.

It presents you with tough choices over and over.
To the point where you feel the misery of these immigrants and you still have to deny their entry into your country, knowing that they will die otherwise.

What an incredibly contemporary theme.

Corruption, bribery and even secret societies are also on the table as some people will try to do anything to get into Arstotzka …and you still have to feed your family.

The reason why I love this game is due to its gameplay simplicity in a cutthroat environment where each decision is critical to the migrant, the State and to your family. A bureaucracy simulator that is actually memorable.
As usual, Lucas Pope turned what at first would appear to be a technical graphics limitation into a graphic style on its own. One that not only simplifies interactions and leverages the narrative, but also that glorifies that great retro ambiance that drives the player back in time to a period of cold walls and warm tensions.

How does this translate into a film?!

I don’t know.
But they did it really well.

The film focuses on the usual role that the player performs. The Inspector sifts through all the data in the documents that he is provided by the migrants to look for info that’s missing or incorrect.

I won’t go into any further details as I don’t think it is necessary to spoil anything in a 10-minute long film.

However, I will say that I was impressed at how carefully well executed the scenario and the attention to detail was in this film. It really captures the essence of the game.
The actors also do a great job at conveying that this is a life/death situation… and yet… just a job.

Summing-up, I would like to congratulate Lucas Pope and his team on being brave enough to make this great short film.

Art isn’t perfect, but this is a great 10-minute piece of art.
It isn’t priceless either – but it is FREE on Steam and Youtube.

Check it out in 4K glory right now:

Regarding the film I will rate it 4/5 Pops – it is great, but it lacks a little bit more depth and desperation that the game is better at conveying …but hey, it is free…

I will rate the must-have-played game 5/5 Pops.
No questions asked.

Missed the first part of this story?
Go check it out now!