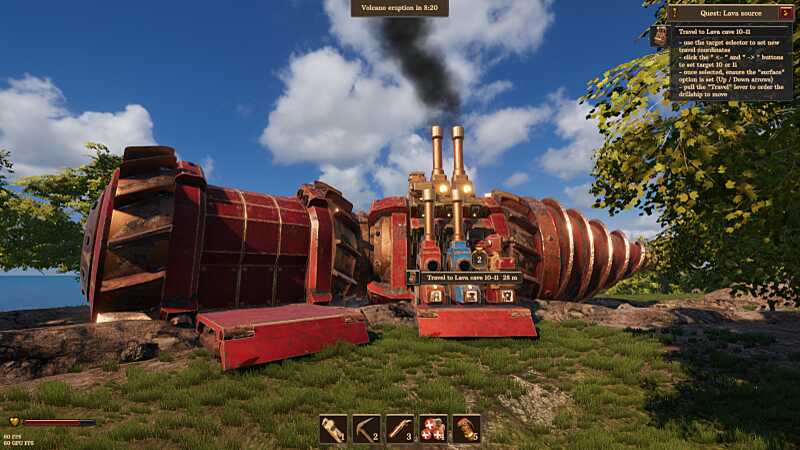 I’ve got a love for steampunk.
I enjoy things that clank and bang – and feeling that awesome sensation of pushing a mechanical button or pulling a lever.

It came to me as a great surprise the fact that I had never heard about before until I saw it at the front page on Steam!
This surprised me even more since Steam has been failing miserably at providing me with good suggestions for games that I’ll enjoy.

Volcanoids has a great premise.

I’m a huge fan of the Guns of Icarus franchise.
Flying a steampunk balloon-ship, firing cannons at the enemy ships and repairing damage with a huge hammer and a group of friends is solid-steel fun and the type of fun you’re able to find in Sea of Thieves as well.
Even if it was a different concept, I thought could be just as fun – so I decided to try it out.

Volcanoids puts you in control of a mechanical contraption that works pretty much like a submarine… but on land… It digs like a mole rat!

Apparently, some mean mechanical beings have triggered several massive volcanic eruptions to sustain their own energy needs.
Those explosions destroyed villages and turned the land into a sad gray wasteland. It is now up to you to survive and explore and eventually find and dismantle the enemy’s mechanical drill.

You need to be careful though as the volcano is still active and spewing rocks and ash from time to time.
When the volcano erupts you need to run to your drill and go underground to avoid damage.

…And the mean robots are still out there.
…And they don’t like you.

Because these guys will attack you and your drill, you need to craft bullets and turrets to protect your beautiful machinery. To craft, you will need to gather materials from nearby mining sources.

Managing power supply is also very interesting. You need to bring coal to your drill and turn your systems on and off to be able to keep the whole thing running without going out of energy.
This adds a welcome new layer of complexity to the game.

Make it do things!

The game really shines when it comes to the feeling of presence and the immersion you get when you enter the drill and make it do things.
When you first start your machine all those cogwheels turning and the noise makes you feel like you’ve given life to Frankenstein. IT’S ALIVE!!!

Just like Frankenstein, this game is still missing some bolts.

We have to keep in mind that this is an early access game by a very small indie dev team. They’ve got a great concept to explore but still many things to fix or improve.

In my view, shouldn’t be available on Steam just yet.
It lacks polish – especially in terms of gameplay mechanics that were, in my opinion, missing.

This decision to go public this early in the project might result in a cascade of bad and undeserved reviews by unaware or unwilling buyers.

I’m hoping that this won’t dishearten the devs into giving up on this project and move on to something else. That would be worse than a volcano covering us all in ash!

For such a small team of they’ve accomplished something worthy of note – it is just the many small things here and there that need improvement.

The truth is that besides the obvious bug fixing that is expected from an early access game (I didn’t encounter any bugs whatsoever – and I was playing at 5760×1080 just fine!), it lacks some core gameplay mechanics and graphics improvements.

I really enjoyed building and expanding the drill piece by piece, section by section. I even enjoyed the countdown (the volcano erupts as timely as a geyser!), which, even though it isn’t very realistic, adds an urge and a sense of purpose to the game.

It would be great to have a seismographer that warns you whenever a random eruption is about to happen but, instead, we’ve got a very precise countdown which is very …predictable.

The tutorial is incredibly long as it details all of the complex crafting processes one by one instead of mixing it with quests and letting the player explore the machines by himself.

Tutorials tend to be unpolished in Early Access games and that’s okay given the circumstances. But let’s be honest, at the very beginning, Minecraft didn’t have a tutorial and it succeeded because the gameplay aspect of building something over time was easy and very captivating.

The same happened with Kerbal Space Program where the player is free to build and make mistakes without a guiding hand going through all of the processes – as long as they’re easy enough to figure out.

Making mistakes is part of the fun.

I felt like the knobs and bobs inside the drill weren’t as interesting as they could be.
There’s a very (unnecessarily?) complex crafting system in place but, to my disappointment, it mostly requires that you use GUI crafting menus instead of pulling levers and pressing buttons.
Most of the machines inside the drill are very similar to each other and are often times duplicated, which makes it even more confusing and somewhat frustrating to find the right one. You are able to build them wherever you like as long as they’re on the walls of your drill. This will let you organize them somewhat.

The gameplay aspect lacks some depth. You just go around gathering minerals to build new structures in your drill and destroying the enemy’s structures.
The game would certainly benefit from posing challenges to the player, like new minions, more complex quests, exploration areas and gameplay challenges.
You also get this feeling that the narrative ends when you start playing as there’s not much of a story afterwards.

The control you have over the drill is very limited.
Whenever you wish to move it, a cinematic shows what’s happening from the outside.
I found out that I preferred skipping the cinematic and instead look at the inside of the drill moving around like a snake as it digs deeper into the earth.
I expected the drilling process to be riddled with clanks and bangs and shakes and smokes – it was instead very smooth, unfortunately!

To graphic or not to graphic

The game looks gorgeous in the screenshots – especially the driller.
That’s the beauty of steampunk! It always looks great!

But the reality is that everything else seems a bit too simple, low-poly and jagged. Some would call it “dated” – which is tag for a new game.

This could be improved by using a different text font, a new lighting system, better resolution textures, more detailed terrains objects or, instead, a minimalistic and innovative graphic style – which is tricky when it comes to steampunk.

As it is, looks above-average-good.
Not yet great – but… with room for improvement.
The unique theme makes screenshots very interesting at first glance, but in-game everything seems a bit too simple.

One of the features I fear the most in their development plans is adding co-op multiplayer and PvP.
From my own experience as a game developer, single and multiplayer games have two very different development cycles.
Adding multiplayer to a singleplayer game is VERY tricky and time-consuming.
They’ve got a great premise for a single-player game with a lot of work yet to be done. Allocating resources for the development of multiplayer is a risk that I wouldn’t take… although it could be fun to play with minions on your side and attacking someone else… but the game has to shine in areas like gathering and UI interactions first.

Back to the surface

I won’t give a rating to this game just yet.
It wouldn’t be fair to rate it as it is clearly still missing features.
We can’t really judge it on what it currently is or what it could become.

However, as I stated before, the game has some curious and unique aspects to it that make it fun to discover – but the player will lose interest quickly if he finds nothing new to explore. Multiplayer could be interesting but given the amount of polish and content that is still required, I’m hoping to one day see this just as a good singleplayer game.

If you’re unsure whether to get this game or not, my suggestion would be to let it cook for a little longer before trying it out. If instead, you would like to try something new then go ahead – get this one while it’s hot!

has a Trello page where you’re able to keep up-to-date with development and see what they’re up to. It also features a Discord channel where extremely friendly devs are regularly giving away keys.

I’ll be paying attention to Volcanoids as it could turn into something really fun in a year or so. I’ll review it again by that time!

Meanwhile, why not check out my other post about this other innovative game called Dungeon of the Endless? Go try it out!

What to expect of Microsoft Flight Simulator (2020)