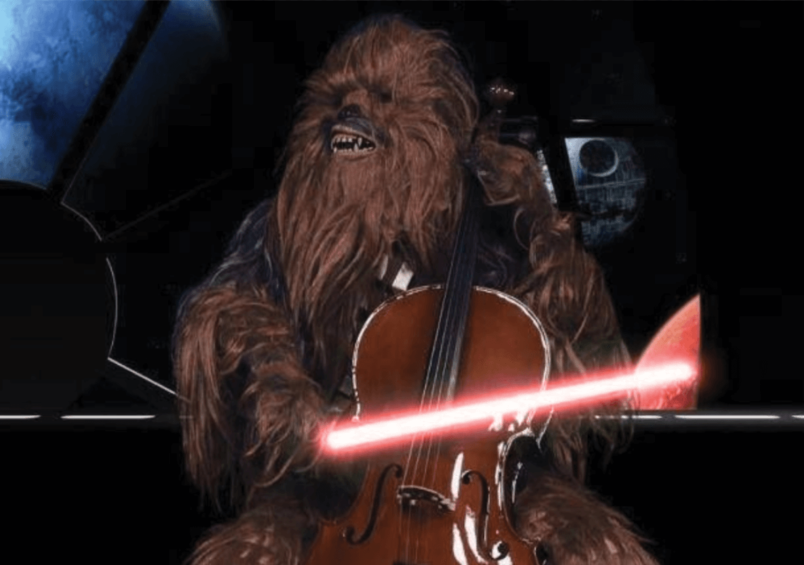 How Sci-fi & Fantasy changed my life

I’m not exactly sure how I came to discover Star Citizen.
I guess it was a long, long time ago, in a galaxy far, far away…

I have to admit. I didn’t grow up with Star Wars, Star Trek, Conan or LOTR. My parents never really enjoyed sci-fi or anything that felt out of this world, unrealistic or fantastic. This meant there were no , elves, action men, or superhero comics during my childhood.
I vividly remember getting two action figures for my birthday and I couldn’t figure out how to play with them.

It is understandable that you might feel an altruistic frustration when reading these lines… Don’t worry, I had a happy childhood. Instead, I turned to legos, puzzles, , TV shows, history books . It might sound strange but I honestly had a lot of fun reading dictionaries… Yeah… I guess I am weird that way.
I was never one to go out and play on the street either… even if growing up in Portugal, the land of football (soccer).

This affected the I played during my childhood. Actively avoiding sports games, shooter games and any other games that were set in space or fantasy related.
I have to admit… I still do avoid some of these themes.

Something that I am now able to recognize is that the lack of high fiction themes actually made me crave those things.

My parents would never buy games for me – they thought buying games was a waste of time and money when I should instead be reading books on Finance and the great classics of literature.

So I had to resort to other forms of getting to them games.

Back in the old cassette or diskette days, pirating games was easy… but not that easy when you don’t know someone who actually owns the game you want.

You have to understand that due to the fact that ads for were pretty much non-existent here in Portugal, most of the times I didn’t even crave for a new game because I didn’t even know it existed in the first place.

One day my father started buying these computer magazines that often times brought diskettes or CDs with plenty of game demos. I would spend hours upon hours playing the same game demos over and over until the next diskette arrived…

I remember playing a demo version of Heroes of Might and Magic III which only allowed you to play for 16 turns! The amazing scenery was quite beautiful – and I often tried to speedrun as much as possible to reveal most of it before the 16 turns were over! …But I never got the chance to actually buy Heroes III.

Thinking that I was playing all these game demos, now made me come to the conclusion that this did make me grow up not only as a player but also as a person.
I just realized that I was playing rather complex games and I didn’t even speak the language nor did I understand advanced game mechanics at all.

Since I had no access to other games I was forced to play whatever showed up – and in the process, I had to figure out how they were meant to be played without tips or instructions.
I was not just learning how to play many different game concepts, but also how to react to very different interface systems written in an unfamiliar language!

Kids need to exercise their brains as often as possible and, to be honest, I can’t think of a more intensive and multilayered activity than this.

The Age of the Internet

The Internet came to my door and it slowly became my world. I was too young and naïve back then to realize the impact it would have on everyone. My parents wouldn’t allow me to go online for a few years – and with that crazy modem screaming like it used to when connecting to the web, it really wasn’t easy going online without having other people noticing.

However, the first thing it allowed me to do was to read articles on newly released games and even to be able to order games online that I would otherwise never be able to get my hands on since there were no shops or arcades near me.

I remember getting the game Descent: Freespace by Volition thinking it was a historical strategy game (how did that happen?!). Slightly disappointed since it was sci-fi themed, I reluctantly decided to play it.

I was hooked…
That game broke my ice towards sci-fi games.
For the sake of time I won’t go into too much detail but… It had such brilliant characters and story arc! It simply blew me away and I never saw that coming.

A couple of years later, with the dawn of DSL and unlimited , something else and something new was on the horizon.
I decided to try Wolfenstein: Enemy Territory – a brand new and FREE ONLINE GAME!
Reluctantly I decided to play it since it was an FPS game… but… well… at least it was free!

I was hooked…
…and I was GOOD at that game!

One day, while playing Wolfenstein, a bunch of strangers that I was playing with, asked me to go and play with them… “to join a clan” they said via in-game text chat. I had no idea what that meant but I “Uh… sure…”.
Butcher, Crisplover, Myrdraal were my teammates in that match – each from a different country.

I had a microphone and I installed Teamspeak to join them… but I was too scared to use my voice!
At one point Myrdraal stepped on a mine and I rushed to him unaware that I was screaming “Don’t !!” with my voice comms active.

Everyone on Teamspeak was surprised to hear my voice.
…I was too.

They all laughed and greeted me and welcomed me to the clan.
Later on, I understood that my careless split-second decision to join them that day had turned into something much much greater than I anticipated. I had made new friends.

Chewbacca with a lightsaber

I was 18 and I had never ever watched a Star Wars movie before and Freespace was the only sci-fi game I had played until then. Some of my ET friends used to play Star Wars: Jedi Academy when they weren’t playing Wolfenstein: Enemy Territory.
I didn’t expect much from a sci-fi game from a franchise that I knew nothing about.
To validate my point, let me clarify that I picked a Sith Wookie as my character …I thought red sabers would go well with brown fur.

Needless to say that I was forced by my roleplaying clanmates to go and watch Star Wars before they allowed me to play with them. And grumpily I did. And it finally opened up my mental doors to sci-fi.

My brain still has trouble digesting weird space creatures or magic and I still don’t see the point in using most of that, but I finally understood… it’s not about the creatures… Sci-fi allows for greater-than-life characters and story arcs. In Stargate SG-1 you barely ever see alien-looking monsters – they’re most often humans with different clothing and earthly needs. But it is the setting that allows a great adventure to happen.

The exact same thing happens with fantasy-themed narratives. I don’t get thrilled by characters using magic… Mordor isn’t fun because of its architecture. It’s fun because it creates a problem that needs solving. The whole Lord of the Rings story is simply about Humanity fighting evil and racing against time – a theme harder to depict in a non-fiction environment.

Fantasy and Sci-fi are an escape from the predictable boring reality of everyday life. It took me some time to grow up and learn that …I dig that.

Even if repressed during childhood, sci-fi and fantasy themes managed to crawl into my life and taught me an important lesson.

While writing this article I’m realizing that the stuff that I’m mostly drawn to… actually sci-fi or fantasy themed! I really feel like I may have lost something during my childhood as I never got to experience those worlds when our imagination runs wild. But at the same time, I feel like this whole process has made me grow up to become a little bit more down-to-earth and pragmatic when it comes to learning and how to enjoy new things.

Today I feel that anything can be enjoyed or learned no matter how much of a lack of interest or mental or physical disadvantage you think you have.

You need to find the fun and motivation in all things.
In my case, it was that dragged me in and the exploratory will to pursue themes that I did not fully understand by playing a game I did not expect to enjoy.
Then my own walls of reluctance caved in when I understood that learning is fun and that having fun while learning makes it easy and achievable.

A couple of years ago I just couldn’t understand why someone would enjoy flight simulators – they seem EXTREMELY boring.
I decided to figure it out – it was hard to understand it at first – but then… I was blown away. The same happened with games like Europa Universalis or Democracy.

For years I thought I wasn’t able to draw.
I lacked the mental ability and the physical coordination to do so.
Last week I was stunned at my very first decent drawings.

Next week I’ll post part 2 of this article… on how I got to Star Citizen.
Meanwhile, why not learn more how I just turned into a blogger?
Not a magic trick. Promise!

P.S.: If you’re more into historical fantasy… why not try Papers, Please?

Dungeon of the Endless – An Indie Game you won’t dare label!

Microsoft Flight Simulator and how Flight Sims landed on me