As you might remember from my previous post I’ve been playing Red Dead Redemption 2 recently. Unfortunately, sometimes, as with Grand Theft Auto 5 and The Division 2, I would experience CPU and graphics card usage peaks that caused the game to pause for a few seconds or even disconnect from the online game when the peak was too long. Sometimes I would get stuck in a loading screen for ages until finally, the game’s online status timed out.

The game “loses” connection to the server, not because of an Internet connection problem, but instead due to an extended delay in a response to the server. This is caused by the local CPU/GPU.

Because of this issue, many players get this message when playing Red Dead Redemption 2 online:

ALERT: You have been disconnected from Red Dead Online due to a fault on Rockstar game services (Error: 0x20010006)

This was particularly common when Red Dead Redemption 2 got released, but I thought I had fixed it until yesterday (14th November 2019) when the new patch was delivered. Apparently, this affects some CPUs and NVidia graphics cards.

I’ll go over the official and the non-official fixes. I’m currently using both.

How to fix stuttering, disconnects, and performance with Launch Arguments

Before following through this post for more in-depth fixes, check out a tool I developed to help you set up Red Dead Redemption 2 launch arguments. One of the sections on that tool is specific to performance. It also helps with graphics, bugs, stuttering, etc.

If it helps you, let me know!

Hold your horses! Update your drivers!

This new official patch actually introduces a CPU load balancing feature – but it has to be enabled manually in the Rockstar Games Launcher. To do this, you should go to your Rockstar Games Launcher and click Settings on the top right corner. Then at the lower-left corner select Red Dead Redemption 2, which will display your options for the game. Scrolling down to the bottom you’ll find a Launch Arguments section, where you should input the newly added argument (on the 14th November 2019 patch):

On the same day, Rockstar dropped an article on how to fix an issue related to certain NVidia graphics cards. Check it out:

Players with NVIDIA graphics cards and 4-core or 6-core CPUs should install the GeForce Hotfix Driver Version 441.34 from NVIDIA and remove any launch arguments to resolve this issue. – ROCKSTAR

This alternative hotfix is available right here by installing the latest GeForce Hotfix Driver Version 441.34.
Apparently, if CPU isn’t your problem, then the graphics card might be the culprit!
Let me know if this solution fixes it for you!

By doing so, we’ll be giving more room for the game to function properly without resorting to RAM buildup or disk caching which both may cause bottlenecks and thus stutters, disconnects, and crashes.

CPU, RAM, DISK, how does that even work… and why is that a problem?!

As you know, a processor makes mathematical calculations, but it takes some time to deliver them.
Let’s say you are the CPU and I’m giving you a paper which says 3+5=?. Easy. Right?


You can’t really hold them all in your hands and you need more time to deliver those results before I give you more calculations to perform!

So you put those sheets of paper on your desk while you make your calculations. That’s your RAM. Once your desk is filled up and there’s nowhere else to put more paper on it you start using your desk’s drawers, which takes a bit longer because now you need to open them up before placing the paper in there. That’s your DISK.

Slowing down to a halt

Okay, so my CPU isn’t the best.
I’ve been using it for a few years now and it is starting to feel the weight of age with heavier processes and games.
GTA V was also very CPU intensive. I also love flight simulators which also consume a TON of CPU capacity. I’m really looking forward to the new Microsoft Flight Simulator 2020. You have got to check it out. It is absgorgeously beautiful.

This has led me to try and find ways to circumvent this issue and get the best performance out of my rig. So let’s get right to it.

Let’s start by freeing up your CPU from unnecessary calculations and clearing up your RAM usage by turning off stuff that isn’t required to run the game.

Start by closing EVERY browser window, WhatsApp, Spotify, opened Windows folders, etc. also check your tray icons next to your system clock for useless software that might be running in the background. Disable any on-going anti-virus full system scans (no need to turn real-time protection off).

Google Chrome is a heavy CPU load hog – make sure you save this page to your bookmarks and close it now! I mean, later, when you’ve read through this post!

Check your system load by pressing CTRL+SHIFT+ESC to bring up your Windows Task Manager and click on the CPU tab to check which processes are consuming the most out of your processor and make try to turn them off if you can.

Note: to the right you’ll also see a tab for GPU usage. If you notice that your GPU usage is above 70% then you definitely should consider upgrading your graphics card. Check your graphics card at GPUCheck and see how it performs compared to more recent card models. If instead you wish to see how your CPU compares, check out PassMark.

An alternative to improve CPU usage and reduce stalling

It helps to maintain system stability by adjusting CPU process priorities. This means that it will do its best to make sure that your system keeps running smoothly by prioritizing processes that are critical to System stability. RDR2 likes to peak CPU usage from time to time – to a point where it will make the whole system unresponsive, which leads to a crash to desktop or a BSOD (it did happen to me before using Process Lasso!).

You may also use it to safely free up RAM automagically.

I have to say that I noticed a significant improvement in system stability since I started using Process Lasso.

They have very nice documentation that explains how to use it in detail. Make sure to check them out beforehand!

Sure, maybe your old machine needs an upgrade – but the truth is that even with new PC builds, you’re prone to encounter issues like these again, as the CPU usage spikes are abnormal and caused by bad programming and rushed software development.

Before spending any more money, follow my tips and see if they solve your problem!

Let me know if they help you play this awesome game! 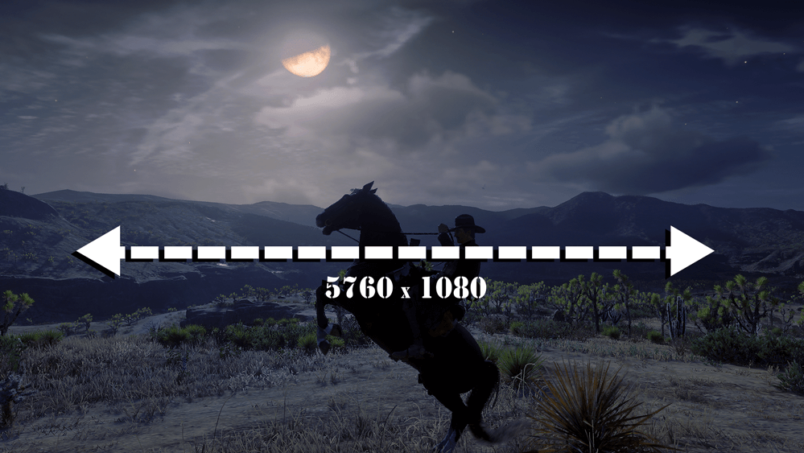 Extend your ride into the sunset!

I just recently decided to hop into Westworld… I mean, Red Dead Redemption 2 on PC knowing that this would be a game I would enjoy.
I’m currently writing a review for it (If only I could stop playing it to write my review…).

This fix may not be required for everyone, but for some reason, the resolution simply didn’t show up on the game’s graphical settings. It only went up to 1920×1080.

Just to be clear, I’ve got 3 monitors and I’m also a streamer on Twitch with a streaming computer that uses one of my screens when I stream, which automatically changes my screen resolution to 3840×1080 – I’m using DisplayFusion to achieve this behavior. Plus HDMI routers, DVI adapters, screen recorders… Not even my computer understands what’s going on with my screen resolutions.

In this post, I’ll be going over several ways to fixing your screen resolution.
Please consider this a repository of suggestions. I can’t promise that they’ll all currently fix the issue, but they have worked in the past. Give it a try and let us know which one worked for you!

Before following through this post for more in-depth fixes, check out a tool I developed to help you set up Red Dead Redemption 2 launch arguments. One of the sections on that tool is specific to screen resolutions. It also helps with performance, bugs, stuttering, etc.

If it helps you, let me know!

This fix should make the game run in any screen resolution.

UPDATE: As of the last patch, it seems like some of these tricks aren’t working for some users. Check the bottom of this post for alternative ways to make it work! Leave me a comment if it does!

A couple of years ago I posted a video on Youtube explaining how to make GTA V work at 5760×1080. Guessing that the engine was the same I thought about doing the same on my blog, but this time regarding Red Dead Redemption 2.

Apparently, the game engine has progressed quite significantly since GTA V. Back then, I managed to find a work-around for GTA V, but RDR2 seems to accept 5760×1080, much more easily.

To make 5760×1080 work, I had to go through My Documents folder and find the Rockstar Games folder. Within it, the Red Dead Redemption Folder and then the Settings folder. In it, you should find a file called system.xml

In this file, down at the bottom, you’ll find:

Here, you should set the screenWidth and screenHeight to your desired screen resolution.
After this step, you should save and close the file and then right-click on it and go to File Properties and set it to Read-Only. This prevents the game from making any changes to it. Keep in mind that setting this to Read-Only will keep you from saving adjusted game settings from within the game. This means that if you make any changes in-game, the settings will be reset every time you launch the game.

Also note that, for even more exotic users, if you’re using several screens but only wish to use one set of them, then you should change the outputIndex and/or the adapterIndex value. This may only be required if you’re using more than 3 screens, or when you’re having trouble with stretching or positioning on 2 screens.

Alternatively, if this change fails to set your resolution correctly, try following my GTA V video which uses windowed mode and a piece of software called ResizeEnable.

As of the last update, it seems like some of these tricks aren’t working for some users. Instead, try using the command line.

Go to your Rockstar Games Launcher -> Settings -> Red Dead Redemption 2 (on the left sidebar) -> search for the launch arguments text field
Then type the following:

You may also replace borderless with “-windowed“.
Alternatively, try using

The reason why you’re not usually able to go full resolution is that when not in surround mode, the game knows you have 3 screens but thinks that you only play in one of them so it sets itself to 1920×1080.

How to fix the UI being displaced or stretched

Some players might be able to set their screen resolution correctly, but the UI elements (the map, the menus) might show off-center, displaced or distorted. To fix this, you may want to try using -noDPIAdjust in your command line arguments list.
A special thank you to one of our users, Jon, who shared this solution by another player who helped him, NorbzFR.

If this guide helped you, send me your best Ultra Wide Wide West Screen Shots!
Too many puns. Bang!