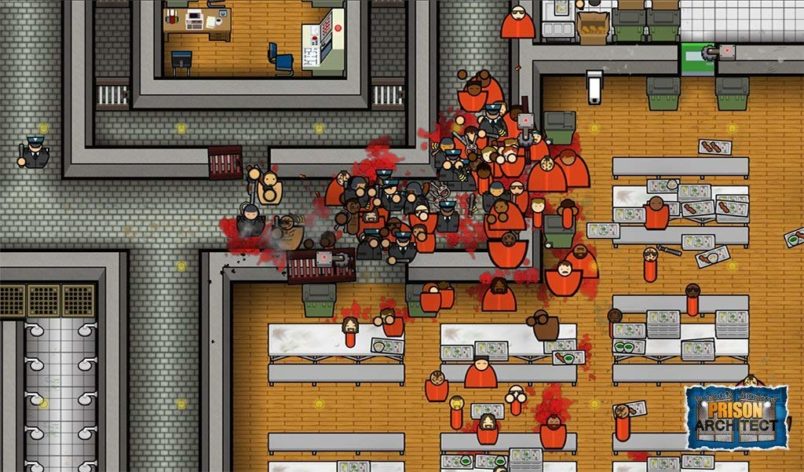 This is one of my favorite management games of all time.

Prison Architect is now 3 years old (since its final release), but it was first released as an alpha version 6 years ago after a very successful crowdfunding campaign.

Paradox Interactive has recently acquired the rights to the franchise from Introversion Software. How will that affect the game? Why are so many fans outraged? Why would Introversion do it?…

Introversion Software is a small team of developers known for creating small but deeply innovative games such as Multiwinia, Defcon, Darwinia or Uplink.

Prison Architect is their crown jewel.

In fact, the whole Prison Architect venture has been very successful throughout its crowdfunded open development cycle.
The devs kept releasing regular updates with brand new content which maintained a healthy and engaged community over the past few years.

The latest update actually introduced an unexpected and seemingly inadequate feature for a game that has passed its maturity.
They added multiplayer!

However, we’re talking about Introversion Software here… and adding multiplayer to a singleplayer management game is pretty damn cool.

A new warden has arrived!

This is why the news of Paradox buying the Prison Architect franchise hit the fans like a rock. They’re afraid that the garage-built feeling that they get from playing this amazing management game will fade in the hands of Paradox. Above they fear that Paradox will do what it has done to all of their other games: DLC spam!

In the good old days before the internet, games would either have sequels or expansions. A sequel pretty recycling of previous game ideas and graphics updates.

Expansions or content packs, on the other hand, increased the depth of the current game. This kept the player base interested in the game – at a fraction of the price – until a sequel would be available. If the game was successful, more expansions would be available. This was as a good commercial compromise for a developer.
Instead of building a whole new game they would use the tools that were already in place – this, in turn, saves time and money.
Expansions were actually large when compared to the base game and relatively expensive as they had to justify the physical distribution costs.
Nowadays, expansions are called DLCs and due to the fact that they are now downloaded, they tend to be cheaper and distributed in smaller chunks.

Paradox has become a master at releasing DLCs – Paradox’s Crusader Kings 2 has 30 DLCs.
The reason why Paradox does this is because they specialize in creating niche games (high value to their niche players) that rely on very complex game engines that only they own.

Game engines are the core of a game.

They are the technical aspect of the game that takes the longest to build. It provides games with their core attributes – UI systems, Audio, 2D/3D Rendering, Multiplayer etc.

So instead of building a brand new engine for each game, most companies decide to make different games with the same engine. Europa Universalis, Victoria, Hearts of Iron, Crusader Kings, Sengoku, and even Stellaris all use Paradox’s own Engine.

Paradox Interactive (the publisher) is often seen supporting innovative smaller developers such as Colossal Order (Cities in Motion, Cities: Skylines). They seem to be drawn towards developers who own solid custom engines that will be able to support great games in the long-run. Engines that lean towards having sequels but more expansions.
Paradox is also well known for allowing people to mod their games to exhaustion. Modding adds even more life and value to their games.

The reason why Crusader Kings 2 has got 30 DLCs in its bag is game has been released in February 2012! …Think about it… the game is now 7 years old and it still gets brand new updates like Holy Fury which was released last November.

Most of the DLCs are cheap, most of them are cosmetic, many of their major expansions are VERY deep and have parts of it released for free and most of them are fully available for free when you’re playing in multiplayer if the other player owns them.
The best part: Paradox’s games are deep and solid enough at launch to provide countless hours of gameplay without the need for .

The reality is… you don’t need to buy any if you don’t want to.

Now, I understand that my position regarding DLCs will surely anger most fans. And I must clarify that I completely the idea of launching when the game has just been released. That is simply ridiculous.

However, most people see as a money-grab opportunity – which it is… but… is it that bad really? DLCs represent optional content that you’re able to get if you REALLY like the game. It helps support the company so they are able to keep on updating the games you love with brand new content.

-No, Crusader Kings 3 isn’t coming out tomorrow. But an amazing Holy Fury expansion has just been released at a fraction of the cost – have you played it yet?

Introversion made a good deal when selling their most-valued franchise when their sales after 3 years are surely gone. Let’s celebrate that! A small company making a ton of money that they can use to come up with brand new ideas!

They would not be making Prison Architect 2 anytime soon – it is not in their DNA to rehash games like that. They would likely need a new engine and many new ideas to pick it up again.

Finally, some people are also loudly complaining about the fact that a crowdfunded game was sold to a publisher.
Now that the game has been released for 3 years …does that REALLY matter anymore?
Is it possible to be happy for having been able to make this game a reality and enjoy it as it is?

TLDR: This is how I see it:

Have you seen my recent post on How Steam broke my Valve? You might find it interesting! Go check it out!